Sometimes you have an experience in life that is very hard to translate into something others can relate to through your own words, and I fear that this may be one of those. I will try to share my encounter with you the best I can…but I suggest you add Varanasi to your list and go and take it all in for yourself.

“Older than history, older than tradition, older even than legend, and looks twice as old as all of them put together.” -Mark Twain

When we arrived in Varanasi, everything was a little chaotic and I was pleased to head out on The Ganges on a boat to see in the New Year camping on an island in this sacred river. The river, although extremely polluted, provides a lifeline for millions of Indians who are dependent on it for their daily needs; water for drinking, cooking, laundry and bathing as well as fish. The river is worshipped as the goddess Ganga by Hindus worldwide, and has historic significance with formed provincial and imperial capitals, but my experience was that of ‘Four Old Souls on The Ganga’, drifting, rowing, drinking chai and eating (almost constantly) our way down the river.

‘Empire of the soul’ by Paul William Roberts provided the entertainment for our journey. As I read it aloud to the other three old souls on board our vessel I was reminded of the differences in all of our reasons for travel; each of us chooses our journey and our destination based on our own unique ideas, and we each have our own perceptions of what we will find along the way. What you have previously been exposed to will determine much of what you imagine from a place and could taint a place with any number of emotions; fear, excitement, trepidation, anxiety. I wonder now what it might be like to visit somewhere I knew absolutely nothing about…but I think that opportunity has passed me by as I have filled my head with images and ideas constructed by others about the places I have not yet been to see and experience for myself.

As we were rowed down the river, locals fished, bathed and laundered their clothes in this sacred body of water. There was clarity in the dependence of man on nature and my appreciation for my recent rhino encounter was heightened as I contemplated the fragility of our ecosystems as man does his very best to ruin all that we have been given temporary guardianship of in our tiny, insignificant lifespans. There was a peace about our journey that I have rarely experienced and I felt as though I was fully able to appreciate the river as many have before and many will again without impacting negatively on it in any way. A truly sustainable experience.

Our food was made on the kitchen boat, and it was amazing! I have not yet created food that good in my own fully equipped kitchen, never mind on a boat travelling down a river in an Indian haze. The men, yes, men (!), on the kitchen boat showed us how to make a few things, including their chai, while we were beached on our island for the night and I can’t wait to try out their recipe. We also played cricket with the boatmen, which was really great. They clearly love the sport, which was a shame for me as I had to confess to being English and take their reactions on  the chin having been annihilated by India in the recent test series! Turns out I would make a much better batsman than bowler, but I don’t think I missed my calling as I was pretty rubbish at both.

New Year’s Eve was spent in tents, with fireworks flying in all directions and chatter round the campfire trying to keep warm. We played the standard ‘two truths and a lie’ game and learned much more about each other; I traveled with an interesting group and it is always a pleasure to share stories of past adventures, especially around the fire. The next day, we rowed on down the river – well, our boatmen did, while we lazed comfortably on the deck eagerly awaiting the next chai break and wishing for lunch time to arrive. Again, the food was fantastic. The best so far, by far.

Tuk tuks were our transport method to return to the hotel and a long-awaited hot shower, but first we had to navigate Varanasi. We got stuck. We got out and walked. This gave us the opportunity to learn a little bit more about the city, and prime us for later events. Well, kind of. In reality, I had no idea what to expect that evening, and was therefore charmed, delighted and surprised in equal measure with the experience of Varanasi by Night.

As dusk began to fall we clambered aboard our boat for the evening and had a tour of the ghats from the river. Of course, the cremation ghat is always the most fascinating and there was a ceremony ongoing as we passed. There must be so many cremations there as the wood supply seemed endless; piles and piles lay in waiting by the side of the sacred river. It is truly incredible how death can bring one immediately into the present; the past and the future become insignificant as I watch.

While the light from the sun faded, our own lights were created as our skipper constructed the little candle bowls that we would launch into the river. The aarti is a ritual that uses fire as an offering, and as we sent out diyas into the water we also made wishes for friends and family that we hope Mother Ganga will enable to come true. As the candles floated away the immediately surrounding water glowed…I imagine that it was during this time that Mother Ganga received our wishes. As it grew darker, more and more diyas were delicately placed in the water and the area and I learned more and more about the ceremony.

The Varanasi Ganga Aarti takes place every sunset at Dasaswamedh Ghat, near Kashi Vishwanath Temple. It’s follows a highly choreographed ceremony that is repeated daily at dusk, come rain or shine. The aarti is performed on a stage by a group of young pandits, all draped in saffron-coloured robes with their puja plates spread out before them. Conch shells are blown, incense is waved in elaborate patterns and flaming lamps are circled creating a red-orange hue against the darkening sky while the rhythmic chant of hymns and clanging of cymbals provides a mesmerising soundtrack as the scent of sandalwood drifts in the air.

It was difficult not to become completely absorbed by all that was going on. As the ceremony continued our boat became completely surrounded and chai sellers hopped from boat to boat selling their tiny cups of goodness;

blended seemlessly with the soothing sounds of the sacred ceremony unfolding before us. The colours, the sounds, the smells are ingrained in my memory. The pandits working in perfect synchronicity to lead this nightly riverside ritual was truly incredible and one of the most interesting spectacles I am yet to see. We attended the prayer ceremony on the ghat closest to the hotel at dawn the following morning where we could see the movement up close. As the sandalwood whafted towards me I was again entranced by the proceedings. People have claimed that the Varanasi ceremony is too extravagant and artificial to maintain the spiritual context, but I certainly didn’t find this to be the case. Obviously it would be ideal to visit the Ganges River in Haridwar and Rishikesh to make an accurate comparison, but I certainly appreciated the uniqueness of the who experience, along with the character and magnetism of Varanasi.


In many ways, Varanasi is representative of Indian stereotypes as a whole; traffic chaos at every turn, cows that clearly know they are holy and the struggle to access a functional ATM during the current financial issues, but on the other hand it seemed completely alien to all of that during the brief ceremonial spells. How can somewhere have two such distinct personalities? 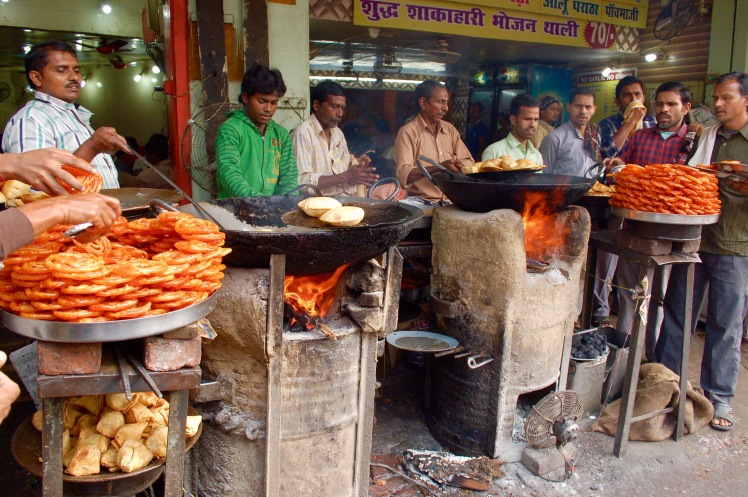 Go and see for yourself.