Having left Kathmandu we headed south-west towards Chitwan National Park. The journey will go down as one of the longest I have taken – even though we covered less than 100km! Setting off early seemed like a great plan and having left the hotel we navigated the winding lanes of Kathmandu before hitting the main road out of the city. Traffic; standstill. We were patient and eventually the traffic eased and we inched our way out of a city I am definitely keen to visit again.

Construction of a new highway meant that we had to get to a certain point on the road before 10.30am in order to continue on our journey. Otherwise, we would be stopped…for hours. Maybe four. Maybe five. As we wound our way through the valley towards the cutoff point, the bus bumping along the ragged road, the river below flowed with purpose along beside us to the right. The valley on both sides cut into neat terraces to create useful farmland from the steep hillside, aided by the work of the ‘Shifting Cultivation Rehabilitation Programme’. Passing tin shacks constructed precariously between the road side and the steep drop to the river below, build to serve coffee to tired truckers trying to reach their destinations in record time, we valiantly tried to meet the cutoff within the realms of our cautious driver’s safe manoeuvres.
We didn’t make it.
Stop.
Wait.
Get out. Walk around. Spend time scouting for a reasonable location to relieve bladder. Decide there isn’t a reasonable location. Get back on bus. Delve deep into the snack bag. Eat snacks. Eat more snacks. Have a nap. Wish for a mandarin seller to materialise. Have a snack. Get out of bus. Walk around. Remember that you need to pee. Remember there’s no suitable location to pee.

It was a special few hours, but it passed remarkably quickly. We chatted. We chatted to locals and people watched, and it was fascinating! Ambulances passed by, which we later found out caused unrest at the point at which the road had been blocked off. People walked. People cycled. People rode their motorcycles past us, but the road was sealed.

There was significant relief when we finally started moving again, particularly when we stopped at a tin shack at the side of the road to use the bathroom facilities!

As we progressed towards Chitwan we passed through small villages with houses made from clay and elephant grass. The Nepalese are friendly people and the children were excited to see our bus, calling to us and waving enthusiastically. As we got close to our hotel in Chitwan, the sun set. A giant circle of gold dropped quickly down below the horizon as this long yet interesting day drew to a close.

Our adventure into Chitwan National Park began by canoe; five of us with a guide in front and our human engine at the back. Crocodiles lined the banks before we even set off and we saw many more as the journey progressed into the Nepalese jungle, but crocodiles were no where near as exciting as our sighting about an hour into the ride.

From afar we could see a large dark mass in 10 foot high elephant grass; a rhino. During my time in Africa, rhino were a tough spot – in two years and many safaris I only saw a handful. This one was right there on the bank of the river in front of us in plain view, taking breakfast! We watched him for a while having beached the canoe on the bank close by; he did not seem phased by our presence and we were able to enjoy his company as he dined noisily about 30 feet away.

We spent the rest of the day scanning high and low, near and far for what proved to be elusive sloth bears and tigers, but the piece de resistance came as we made our way to the guest house at the end of our safari; another rhino. Closer. Again, in elephant grass and eating; but close, very close! This one had been fighting and had a large wound on his left shoulder, but he was calm and content with us observing him as he had his afternoon tea. Just as with the animals seen on Safari in Africa, it was a pleasure and a privilege to be able to witness incredible creatures existing in their natural habitats. It will never stop amazing me how gentle such large animals can appear, yet the wound provides evidence of their power, resilience and determination to fight for their territory. 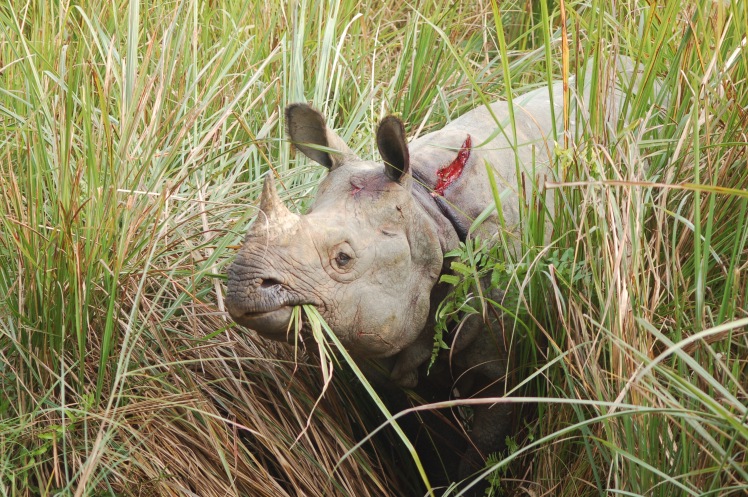 Having traveled back across the river as the sun began to dip, creating an eerie glow over the water, we arrived at our accommodation for the evening. The rooms are unremarkable, except to say that the pillow was filled with cotton balls, the duvet weighted 10 tonnes and the bed was probably harder than concrete, but the hospitality and the food were outstanding and made the discomfort of the night irrelevant. Having shown Rana and Krishna how we like our hot rum toddy, she kept them coming for the rest of the evening – just the right combination of honey, lemon, ginger and rum to stave off the evening chill, which was soon eliminated by the campfire. We sat. We chatted. We shared our stories, and in particular, learned about our guide in Chitwan whose name is Biko. His English is excellent and we shared many jokes with him that most English speakers would struggle to understand. He put this down to watching ‘Friends’ on television – he’s a Chandler, for sure! 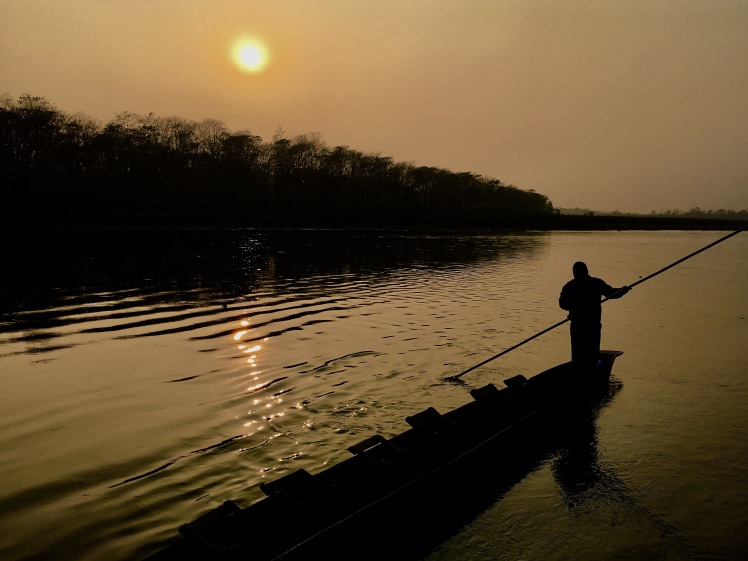 The journey back from the National Park the next morning followed a breakfast of Banana pancakes, and was planned to get us back in time to go to the 13th Annual Chitwan Elephant Festival. No sloth bears, tigers or rhino on the way, but once we were out of the national park we drove through fascinating rural villages where, once again, the friendly Nepali nature shone through as we were smiled and waved at as we passed.

The elephant festival was…well, I don’t know what it was! Elephants were painted with brightly coloured decorations – some even had their toe nails painted – and they were all being ridden. I don’t know how I feel about this because it’s part of their culture, and I don’t want to project my beliefs about how animals should be treated onto something that has happened for centuries, but equally, I know that elephants feel. I have seen them as families in the wild, and seen the relationships required between calf and keeper when visiting the orphanage in Nairobi and know that they crave love and affection rather than poking, hitting and kicking. They had races, a beauty pageant and elephant polo…and I suppose it’s really no different to the local people than westerners riding horses. As an outsider, looking in, who didn’t give any money for entry fee or to the elephant handlers (people were having their money passed to the handlers on top of the elephant by the elephants themselves) I am simply raising awareness that this event exists. As soon as the events began that involved handlers hitting the elephants I left as this made me too uncomfortable to watch, and anyone who knows me will know that I do not condone any cruelty towards animals but the challenge here is not to project my beliefs onto another completely different culture to my own.

Our walk back to the hotel gave us the chance to see village life up close and in slow motion; until now we had either been on a bike or in a Jeep, which didn’t really make for the best photo opportunities. The local people seemed as intrigued by us as we were by learning more about their way of life.

Many of the houses had hand prints around the door frames created during the most recent Diwali celebrations, which brought a more homely feel to their basic abodes. Children played in the yards, or sat with their mothers and sisters having their hair brushed, or grinding grain and pickles for the evening meal. It is a very family centred culture and they seem to do much more together than western families do today. Many, if not all, of the homes have their own livestock, much of which lives in an attachment to the house and they appear to be taken very good care of; I suppose the dependence on these animals for food/milk etc has taught them the importance of even ensuring that the animal has food before themselves.

The evening entertainment came in the form of a local dance performance. The hall was packed – even overflowing – for this nightly show that included a number of different types of Nepali dances. The MC was extremely difficult to understand so I don’t really know what the dances were about, but there was one that needed no explanation and was fantastic; a fully grown man must have been bent almost double to fit into a peacock costume! He danced, drank water, sprayed water and displayed his feathers fully capturing the mannerisms of this beautiful bird, of which we saw many in the National Park.

As the sunset on our time in Chitwan I added it to the list of the many places I would like to return to some day. If I drive around that park enough, surely some day I will see a tiger…?!