There are possible spoilers in here; if you want to be completely surprised by everything, don’t read it!

I do not tell the story of the play but you will find out a lot about what you can see on the studio tour.

A few months ago, a friend asked me if I wanted her spare tickets for both Part I and II of Harry Potter and The Cursed Child which is showing at The Palace Theatre in London. Although I am not a ‘superfan’ of Harry Potter, I enjoy the story and have watched all of the movies more than once, so I thought it would be pretty cool both to hang out with her in London (she’s a Canadian I met whilst we both lived in Oman and she still lives there) and to see the play so jumped at the chance. I had also looked a few times at going to the Warner Bros. Studios near Watford to see the sets, but a. it had always been booked when I wanted to go and b. I wanted to go with someone to reduce the number of selfies required…so, I booked the only tour time available on the day of Part II so we could have a Harry Potter fest!

Standing in line for the first part of the play it became apparent just how seriously some people take the wizzarding world of Harry Potter; people were dressed in full robes (mostly of Gryffindor and Slytherin houses – both of which I had to check the spellings for so am clearly not a big enough fan!), someone had a skirt which had been made out of Harry Potter newspaper fabric, the whole Primark Harry Potter range was on show, there were many scarves (in the unusual 30ºC heat we have been experiencing during this stunning sunny summer of 2018)…and this was just the adults! Anyway, after waiting in a line that we joined when it already covered 2 sides of the building and was still growing we passed some quite thorough security checks (is that normal at the theatre these days?), had a drink in the Stalls bar, which was at least a thousand degrees hotter than it was outside, we took our seats ready for the show. Little did I know that we were actually in for a treat because Part I was actually great; the magic used on stage is well crafted and slick and not only is the story good, but there were actually laugh out loud moments. The actor playing Scorpius is truly fantastic, and along with a fantastic cameo from Moaning Myrtle were the acting highlights for me. I don’t want to give too much away, but the way that the Dementors have been created and are used is also incredible and so much credit for the success of this play has to go to the creative team. Impeccable timing really makes the magic of this play. Of course, curtain closes on Part I with the audience gripping on tightly to the edge of a very steep cliff on which the entire future of the world depends….they knew we’d be back for more!

An early morning followed with a 9.30am booking at the WB Studios and a quick jaunt across London to get a train from Euston to Watford Junction to pick up the shuttle bus to the studios. I had prebooked the tickets (as you have to because it is sold out every day) but you are still charged £2.50 return for the shuttle bus (which has to be paid in cash), which I think is a little unnecessary given the overall cost of this as a day out…but it is basically the only option if you choose not to drive, so be prepared to add this into your expensive day! It’s quick and efficient and there are people organising the line and providing information about where to go when you arrive etc whilst you wait so it is well organised and it is about 15-20 minutes journey. Once we arrived there are two places you can go – either into the ticket collection line if you chose not to have your tickets posted to you for an additional £3.95, or straight to the entrance if you invested this money. Given that the price of a 1st Class stamp is 67p it probably wont surprise you that I didn’t elect to pay this extortionate amount of money so we joined the collection queue. Now, if you can’t tolerate queuing then this probably isn’t the place for you. Stay away, just like you should from theme parks and shops during the whole of December and about three quarters of November, because we queued a lot. Eventually we collected our tickets (after getting to the front of the line to be told the computer didn’t work and having wait longer for one that did) and joined another line to clear security. Then we walked to a kind of lobby area with toilets, Starbucks and the tour entrance where our tickets would be checked for the third time, and joined another line for our prebooked Digital Guide. We had only booked one in the hope that we would have little earphones and could listen to one each…but alas, we were given those same headphones you get on the plane, so purchased a second guide to avoid having to spend twice as long in each location whilst we both listened to the info. Then we got into the main tour entrance queue where we snaked around a giant version of the Tri Wizard Cup for about 25 minutes before the tour began. 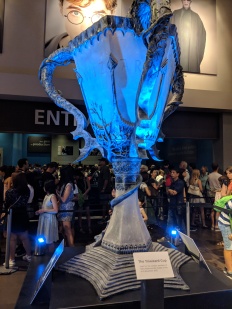 We were ushered into a room where a tour guide stood in the corner and introduced the tour with a whole array of bad jokes and threats about spending life in Azkaban for using our phones in this section and the next before seeing a short video sequence about how the Harry Potter movies came to be. Next up was a cinema room where further bad jokes and unnecessary audience participation were required to introduce a video of Daniel Radcliffe, Emma Watson and Rupert Grint talking abou

t their experience working at the studios and rightly highlighting the many many people who worked to make these films amazing. Fortunately, the next part of the tour is the last part where you are ushered from place to place. Birthday kids were invited to knock on the door to the Great Hall and in we went. It looks exactly how you would expect it to! There is a Goblet of Fire at the far end and it works so everyone gathers round and a name is spat out.

The room is adorned with original costumes from the films and there are barriers so you can’t touch anything – so don’t get your hopes up about having a photo taken sat down for dinner in the Great Hall with your friends. 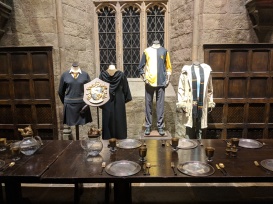 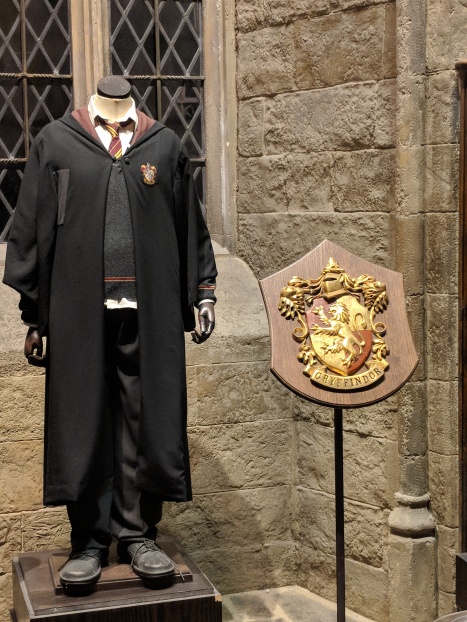 After a while we were all politely asked to leave the Great Hall so that the next group could come through, and from there you go further into the studios and you will get your information either from the many sign boards and video screens around the studios, and/or from your Digital Guide. The DG is an iPhone sized device with neck strap that you have control over. It contains numbered video clips that correspond to different locations on the tour. I listened to about 22…but after that I did get a little bored and decided to just enjoy my surroundings! There are also extra videos that you can watch – again, I watched some, but it seemed more important to look at all the things rather than a video talking about all the things that I could be looking at if I wasn’t watching the video. The animal ones were quite interesting though so would recommend those!

I will spare you a blow by blow account of what I saw by sharing a bunch of pictures:

There’s a lot to see, and some fun photo opportunities. There are green screen opportunities too – we didn’t use them, but you can ride a broom and take a trip on the Hogwarts Express. I didn’t look at the costs to purchase these, but I can imagine they weren’t cheap, so if you are bringing a ‘superfan’ with you, be prepared to splash out! Of course, there are a number of gift shops, so factor those in to your budget to.

I am glad we planned our itinerary as we did as it was really eye opening to see the way that magic is used on the stage with the sandwich filling of the incredible work that goes into creating magic in the movies. Part II did not disappoint in terms of more clever magic, more laughs and a satisfying conclusion to an entertaining story (which I obviously do not want to ruin for you!). Worry not – there are familiar spells, familiar characters and of course the chance that they all live happily ever after….or do they?