I walked the last 25m or so of the Siq with my head down trying to resist the temptation to peek at the site I had been anticipating when I booked to visit Jordan. When I stepped out into the open from this long sandstone canyon that had paved the way for Nabataeans to enter the city of Petra between 312 BC and AD 106 I took a moment to enjoy the view of my trainers before slowly lifting my head to see what I came for. The rugged desert canyon in which I stood is home to The Treasury, and is the entrance to Petra Archaeological Park, which was designated as one of the new seven wonders of the world in 2007. 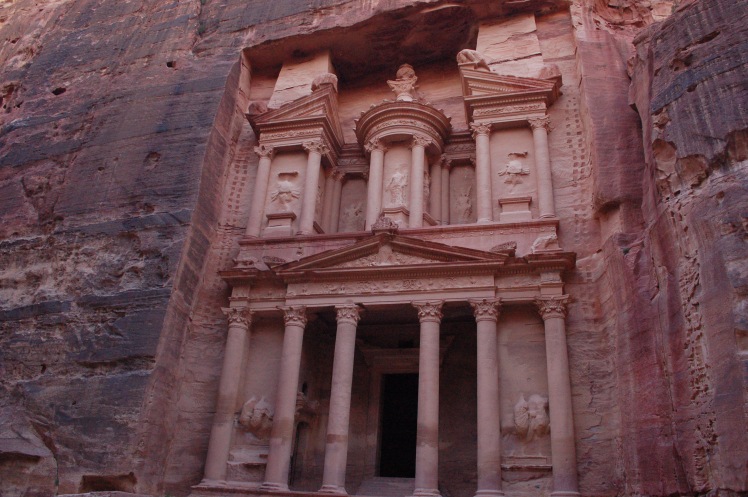 The stunning facade had been carved into the reddish sandstone and camels sat in front of the entrance sparking imagination of a bygone era in which this southwestern corner of the Hashemite Kingdom of Jordan was a vital area in international trade, which did not diminish in significance until the arrival of the Romans in AD 106. A closer look reveals the challenges of creating something so beautiful and so detailed as a carving into the face of this sandstone wall. The facade was used in ‘Indiana Jones and the Last Crusade’ but the movie implies that the inside of the tomb is extensive when in reality the internal space is far smaller.

The giant urn carved above the entrance to the Treasury is scarred by gunshots. The Bedouins say that men believed that the urn contained loot that they could claim if they were able to break it open. Unfortunately the urn is actually sold rock and therefore their efforts were futile. 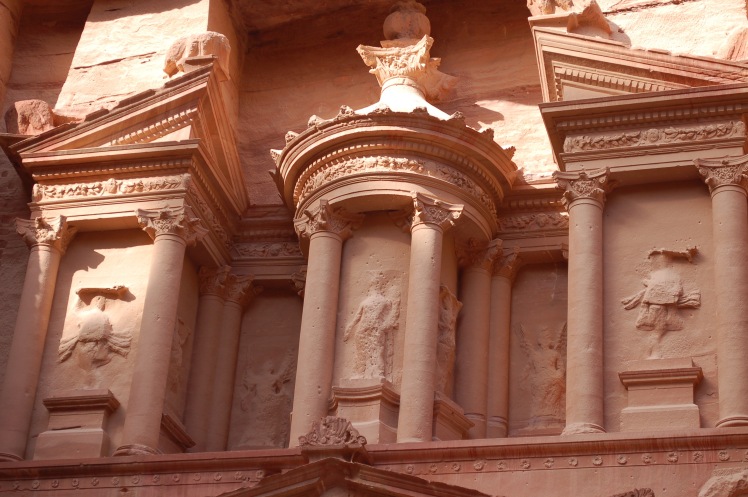 The site was only seen by a European in the early 1800s when a traveller disguised himself in Bedouin costume and infiltrated the mysterious locale. A recent National Geographic article suggests that only about 15% of the site has been excavated – it is incredible to let ones imagination wander to what there might still be to discover!

From the Treasury we walked down the main path, stopping to meet Marguerite van Geldermalsen who is a New Zealand born nurse who came to Jordan and married a Bedouin; she wrote a book about her story, which I bought from her. We passed numerous tombs, the theatre and every building and facade was equally fascinating. We progressed to a path that meandered up into the mountains towards the Monastery and after about 40 minutes we reached a clearing. I make a controversial comment in saying that I found the Monastery to be even more incredible than the Treasury!

It is such a shame that these amazing blends of Nabataean and Greco-Roman architectural styles in the city’s tombs have been looted by thieves and that their treasures are lost to history. However, scrolls written in Greek dating to the Byzantine period were discovered in 1993 when a church near the Winged Lion Temple were excavated and research continue to analyse their content in the hope of shedding some light on life in Petra during this highly significant time period in this area.

As one wanders the streets of Petra the remains of the Nabataeans innovative networks for the capture, storage and transport of water are evident, as well, of course, as their clever irrigation systems allowing them to farm in this difficult environment.

Our journey continued as we weaved our way through the area of Royal Tombs. It was fascinating to imagine the effort that went into construction in this area – and even more so imagine what is still to be discovered and what has already been lost to the past. Once Rome took possession of Petra in AD106 its significance in international trade waned and the decay of the city accelerated, aided by earthquakes in the area and the importance of sea trade.

Our final visit, before returning along the main route back past the Treasury for a final glance, was to hike up to the High Point of Sacrifice. The steps began just by the amphitheatre and again, imagination is required to think back to the colourful procession that would have taken place up the 800 or so steps with musical instruments and animals carrying the wood for the sacrifice. There are two Obelisks on Attuf Ridge marking the mountain near the high place. They are carved out of solid rock and are over 6 meters high. They have been noted as Nabataean as one of them still has the typical Nabataean style of etching on the side that is protected from the prevailing winds.

The high place has a large pool where rain water was collected and available for the priests. In front of the alter was a large open space with a ridge in the middle where something would have stood. Against the cliff are two alters; the alter on the far side may have been used for blood- as animals were sacrificed the blood was drained onto this altar. It appears that it would have run around the outside of the altar and then down the mountain. The main alter was for the burnt sacrifice. It contains several small steps and a niche where the fire likely would have been used. There has been suggestion that human sacrifice could have taken place in Petra, though evidence is based on written inscription and can therefore not be proven. 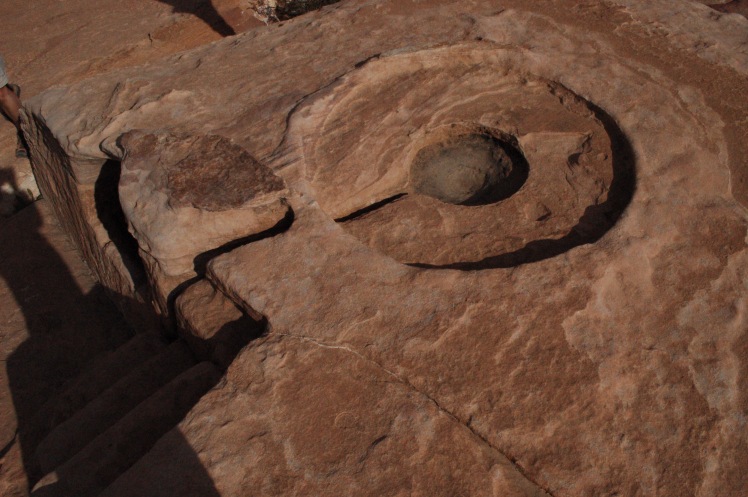 The day walking nearly 26km around the ancient site of Petra was incredible. It would be amazing to return to Petra some day and see that more has been discovered – but for now, I will live safe in the knowledge that I have seen and experienced one of the (new) seven wonders of the world, and it was stunning.